Fleas and ticks have an unfortunate long-term relationship with our pets. While these pests will never go away, we can keep them from rebounding on our four-legged family members.

A variety of products such as topicals, chews and shampoos are available to help protect your pet from these pesky pests. When using such products, however, be sure to always follow the instructions, and never mix products and species. For example, never treat your cat with dog-specific flea treatments. Cats are much more vulnerable to insecticides, and using canine products on your cat could seriously harm or even kill your pet.

In addition to chemical preventatives, you can also somewhat control your environment. Fleas thrive in shady, humid areas, so the more sunlight you can give your yard, the less likely you are to play host to these pests. Ticks prefer areas of tall grass, brush or leaf-litter, so try to keep these areas to a minimum in your landscaping.

Call us today to buy your pet's protection!
Posted by Unknown at 7:54 AM No comments: 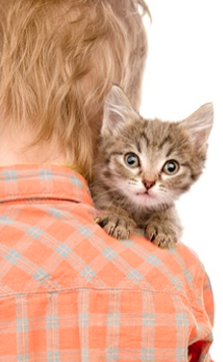 The itching, scratching and general ick-factor that ticks and fleas cause are minor compared to the diseases they can inflict upon your family.

Ticks can infect your pets and you with a variety of illnesses ranging from Rocky Mountain spotted fever to Lyme disease. Even if they don't carry disease-causing bacterium, the sores they leave behind can become infected by plain old infection-causing bacteria.

Fleas carry disease-causing agents as well, from rickettsiae diseases (which can cause typhus, for example) to tapeworm infections. Your pet can also develop an allergic reaction to the flea bites, which can have serious consequences such as scabbing and even skin infections.

Contact us TODAY to buy your pet's protection!
Posted by Unknown at 1:09 PM No comments:

These summer days may be great for lazing away outdoors, but they're also prime time for flea and tick infestations.

Fleas thrive in warm, humid environments (hello, summer!). The most common culprit is the cat flea, which (despite its name) can afflict both cats and dogs, as well as rabbits, ferrets, raccoons and other animals.

Tick infestations are also more common in summer, as we are more likely to explore the areas that ticks like most. Specific species of ticks are often restricted to particular geographic regions: the American dog tick, for example, is primarily found in the mid- to eastern- part of the U.S., while the Pacific Cost tick is found along the western coastal regions of the U.S. and Mexico. The Brown dog tick, however, can be found throughout the U.S., and when all species are considered together, no part of the U.S. (except Alaska) is considered tick-free.

Contact us TODAY to buy your pet's protection.
Posted by Unknown at 1:14 PM No comments: 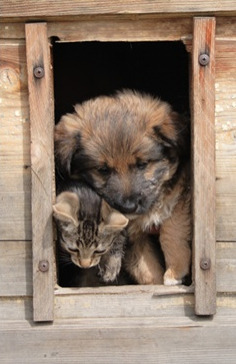 Don't let flies bother your furry family members this spring! Summertime is fly season, and while you may think the kind that hover around leftover food or garbage are annoying enough, another kind is even more annoying - and potentially harmful - for your pet. It's the Cuterebra fly, and its larvae can literally make a home in your pet.

If you pet becomes a host to a Cuterebra fly larva, you may notice a small lump on the head, neck or body. While these lumps can be mistaken for other infections of tumors, if you see a hole in the center of the lump, it is likely that a larva has made a home in your pet. Please do not probe the lump yourself.

Destroying the larvae can cause infection and potentially serious allergic reactions in your pet. Instead, contact our office immediately about diagnosis and the possibility of safely removing the larvae, as well as any post-treatment recommendations.

Schedule an appointment today and let's see this fly flee!
Posted by Unknown at 1:04 PM No comments:

Best Friends Veterinary Medical Center provides dogs and cats with the highest quality veterinary care in a compassionate, comfortable and nurturing manner. What sets us apart is our basic approach to care. In order to minimize stress for the animals, the clinic is divided into two distinct and separate areas — one for dogs, one for cats.